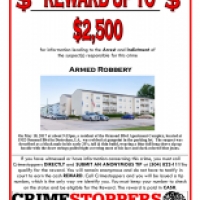 Update: July 6, 2017 Acting U. S. Attorney Duane A. Evans announced that Deltoine Scott and Jerome Kieffer were indicted by a federal grand jury for charges of attempted bank robbery resulting in death, using a firearm during and in relation to a crime of violence that resulted in death and making false statements to a federal agent.

On May 18, 2017 at about 9:15 p.m., a resident of the Ormond Blvd. Apartment Complex, located at 1952 Ormond Blvd. in Destrehan was robbed at gunpoint in the parking lot. The suspect was described as a black male in his early 20's, tall & thin build, wearing a blue full long sleeve zip up hoodie with the draw strings pulled tight covering most of his face and dark colored blue jeans.