The NOPD has obtained an arrest warrant for 18-year-old Jonathan Evans, who is wanted in connection with the fatal double shooting that claimed the life of 22-year-old Kendrick Bishop and 18-year-old Kendred Bishop. Both brothers were gunned down inside of a vehicle in the 4800 block of Bright Drive. The incident occurred on Monday, May 25, 2015.

Around 5:45 a.m., officers responded to a call of shots fired in the area. When officers arrived, they found both brothers shot to death inside of a black Kia sedan. Both victims died on the scene.

During the course of the investigation, Detective Gregory Johnson received a Crimestoppers tip connecting Evans to the murder.

Detective Gregory Johnson was able to obtain surveillance that depicts Degruy and Evans possibly running from the scene and making a purchase at a nearby store. Degruy is seen in the video wearing a dark colored hooded shirt while Evans is wearing a hat and short pants. The surveillance video can be seen below.

Once apprehended, Degruy and Evans will be booked with two counts of Second Degree Murder.

Degruy and Evans remain at large.

See photograph of Evans below.

The investigation is on-going. 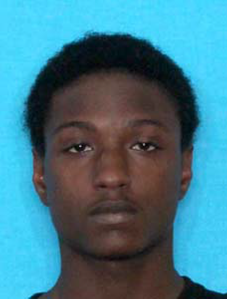 Citizens with information that can help solve this crime are asked to call Crimestoppers at 822-1111 or toll-free 1-877-903-STOP. You could receive a cash reward of up to $2,500 for the information leading only to the arrest, except on homicides, where Crimestoppers will pay half of the reward upon the arrest and half on the indictment of the responsible person(s). You do not have to give your name nor testify to receive the reward but you must contact Crimestoppers directly with your information. Citizens can also submit an anonymous tip online to Crimestoppers at www.crimestoppersgno.org.