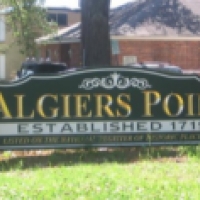 A female jogger was brutally attacked and raped between 8-9 pm on December 28, 2016 at the levee just past the Old Point Bar in Algiers Point. Her attacker was described as a

male wearing a white shirt with a large black logo/text on the front, black shorts and dark shoes. He was in his late teens or early 20s, about 5'8" to 6' tall, with a lean but athletic

build and extremely dark complexion.  He also had shoulder length small twists or braids. The victim tried to fight off her attacker so he may also have scratches or defensive wounds.